For years we have been informed about the ever-increasing adoption of the internet, so you’d be forgiven for thinking that now, in 2018, it is pretty much ubiquitous. You would, of course, be wrong. Of an estimated global population of 7.6 billion in 2018, just over half are online. That’s around 3.5 billion people who are not currently enjoying a happy puppy meme. 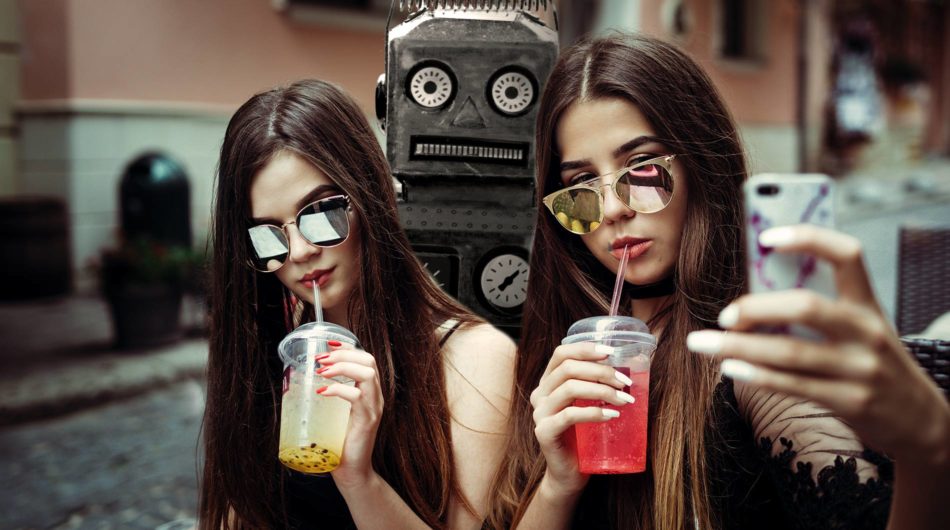 By 2044 a bigger-picture type of internet will be prevalent. The Internet of Everything (IOE) will have transformed the interconnectivity of people, information, transport and money. Sensors embedded in wearable technology and even within our own bodies will form a significant part of how we communicate with each other and the world at large.

The five-inch window through which we currently consume the digital world is likely to be confined to history. Virtual- and augmented-reality experiences will be a prominent choice when it comes to connecting with a variety of scenarios, such as travel, tourism, shopping and, yes, good old-fashioned communication.

So what can we expect social media to look like and what role will it be playing 25 years hence?

1. Integrated
As with the broader internet, social media will be integrated into everything. Wearable technology will be a big part of this. We will be able to share our personal experiences in real time. Expect this to extend way beyond a like – to taste, sensations (yes, that’s right, sex) and even smell.

2. Immersion in real time
Already acceptable in a ‘why would they want to film that?’ sort of way in 2018, the eye-witnesses of the future will be live streaming and there will be lots of them. Viewers will be able to use VR (virtual reality) to immerse themselves in the action in real time. It has been said that the internet has disconnected and numbed us to real-life experiences. Expect that to change.

3. Shared experiences grow
The stick that social media naysayers often use is that social media ‘isn’t real’ and what happened to ‘small boys in the park, jumpers for goalposts’. It’s worth addressing those issues through a different lens. Human beings will always need contact with each other – that will not change. It’s just that now, and certainly 25 years hence, we will be able to do so in many more ways. Shopping with your friends, attending a family wedding on the other side of the word, going to Comi Con will all be enabled through VR and AR technology.

4. Voice activated
By 2044, keyboards on almost all devices in use will be obsolete. Interactions on social media, as is likely to be the case with most other digital channels (even the idea of individual channels will be somewhat quaint) will be almost entirely voice-controlled. Walking into your home and shouting ‘Play Neil Diamond’, talking to your hand or just appearing to mutter to yourself as you walk down the street will appear entirely normal behaviour. As it should…

5. Decision-making data
In 25 years this will be normal and expected. In 2018, Nike knows how often, fast and far you run and can recommend fitness programmes off the back of that insight. In 2044, personalised content, based upon data gathered from digital activity and your social interactions therein, will be highly accurate, relevant and useful. Due to revised privacy laws that reward the data creator rather than just the gatherer, the relationship between user and social media is much improved and the mutually beneficial contract is understood. Unlike in 2018, when a search engine (there are many available) can listen in to a drunken conversation I’m having about cat trousers, then message me later to see if I want to buy some.

In 2018, we think of social media as a ubiquitous channel. But, as with our supposition about the internet, we are incorrect. Only 42% of the world is plugged in.

In 25 years, it is going to be all-in for everyone (with a select few living off the grid, trying to destroy Skynet). Like electricity is for us now, so the digital ecosystem will be: all around us, integrated, social, virtual, augmented and, well, just how the world works.

For those of us now around middle age, the future will bring a tinge of nostalgia as we eventually read our last article by a ‘social media expert’, and our grandchildren ask us what the hell ‘Twitter’ was and why they let mad people use it. Think now, of an ageing parent asking, ‘Where’s the internet thing on this table computer,’ and you’ll realise the term is history by 2025, let alone 2044.