Head of Innovation for the Zenith media agency and also a top LinkedIn influencer, Tom Goodwin recently created this meme, which has been working its way around professional social media networks. 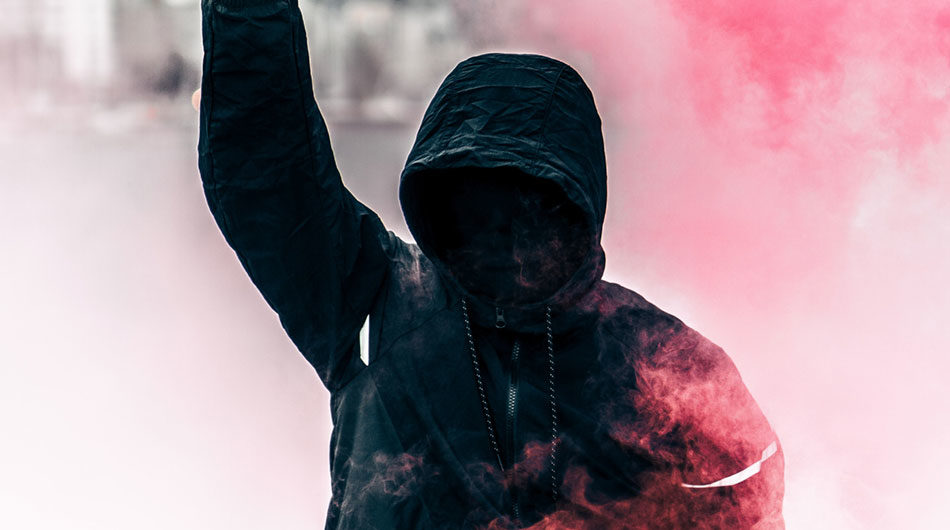 Photo by Warren Wong on Unsplash

So apart from what’s mentioned, what do they have in common? When you think of some of the biggest disruptive brands today, the chances are their business models require a level of user-generated participation to benefit the customer and the business. 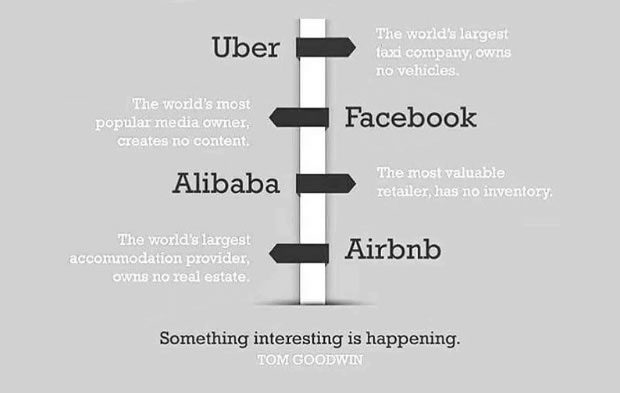 You may have heard bitcoin mentioned in conversation or in the news but have no idea what it really is. Well, bitcoin is currently the most successful of the cryptocurrencies. If you’re lost at the term cryptocurrency, too, it’s defined by the Oxford Dictionary as a digital currency in which encryption techniques are used to regulate the generation of units of currency and verify the transfer of funds, operating independently of a central bank. Bitcoin uses peer-to-peer technology to operate without central banks – managing transactions and the issuing of bitcoins is carried out collectively by a network. Bitcoin is open source: its design is public, nobody owns or controls bitcoin and everyone can take part.

So apart from its original application of secure transactions, why has it become so successful? The other aspect to cryptocurrencies is their trade market. At the time of writing (mid-December 2017), the value of 1 bitcoin (or 1Ƀ) had recently reached a peak of over $17,000 and the cryptocurrency was gaining a great deal of attention. The cryptocurrency market is far more unpredictable and volatile than the stock market, and is seeing a fluctuation of hundreds of dollars per day, which makes it an attractive prospect for high-risk investors and a disruptor for the traditional banks and finance sector.

Unlike other private taxicab companies, Uber doesn’t have its own fleet of vehicles ­– it operates as an aggregator, putting the driver in contact with the user. Even though to become an Uber driver there is a list of requirements both for the driver’s vehicle and credentials, and even though drivers require a private hire licence, they don’t need a hackney carriage (taxi) licence or have to pass the infamously difficult ‘knowledge’ exam essential for black cab drivers in London.

There have been private hire taxi companies for a very long time, but the disruption of Uber boomed due to usability and cost for customers. Being able to hail a taxi via the tap of a button and making cashless transactions led to a huge shift from London’s iconic black cabs. However, Uber has not had its licence renewed by Transport for London due to it not being a ‘fit and proper private hire company’, and its lack of ‘corporate responsibility’ was also mentioned. It is still allowed to operate, however, while it goes through the legal appeals process.

Much like bitcoin, Uber is a modern day example of the innovation technology causing disruption to the status quo.

Social media networking was already a popular activity online at the dawn of Facebook in 2004, but nowhere near the level it’s reached today. In the mid 2000s, the likes of Myspace was already shaping the way we connected with each other, however Mark Zuckerberg’s creation monetised itself in a creative way. Rather than using display advertising, Facebook realised that it held a lot of valuable user data, and could offer cheaper and more targeted advertising to advertisers.

Fast forward to today and targeting follows us around every aspect of the web. Facebook didn’t necessarily invent targeted advertising but it always had the advantage, knowing far more about its users than other media offerings. Facebook is becoming so targeted that there is a widely growing conspiracy theory that it is using microphones on our smartphones to help target us. However, this has been officially denied by Facebook’s Rob Goldman, who tweeted: ‘I run ads product at Facebook. We don’t – and have never – used your microphone for ads. Just not true.’

Alibaba, founded in 1999, is one of the world’s biggest retailing businesses that you have indirectly bought from. Ever noticed that when you search for a selfie stick or phone case on eBay that hundreds of similar-looking products pop up? That’s most likely because an eBay seller has bought their inventory from a manufacturer through Alibaba. Alibaba has become the world’s number one B2B trading platform that links manufacturers from countries such as China, India, Pakistan, the United States and Thailand with international buyers. The business has grown over recent years and various other enterprises have been launched, such as Taobao.com, which is its Chinese customer to customer (C2C) offering and is currently the 10th most popular website in the world, as recorded by Alexa.com.

Unlike ecommerce giant Amazon, Alibaba Group owns no warehouses and holds no inventory. Alibaba is merely the online mediator between manufacturers and buyers. While Alibaba’s revenues are only a fraction of Amazon’s, it operates with higher profit due to not having to manage expensive and complex logistics like Amazon, and operates totally online.

Airbnb, if you don’t already know, is an online marketplace and hospitality service for short-term accommodation rentals. The company was officially launched in 2008 and is based in San Francisco. Its incredible international expansion began in 2011, when it acquired German ‘equivalent’ Accoleo.

Much like the other brands mentioned, even though there have been various competitors offering the same service as Airbnb for a long time, it was Airbnb’s refinement on user and customer experience –­ not forgetting competitive pricing – that made it stand out from the crowd. Concur, the world’s leading provider of travel and expense management services to businesses, reports that Airbnb saves users 41% when compared with hotels (that’s a staggering average of $102 a night). Airbnb is in 65,000+ cities in 191 countries, making a vast choice for users at affordable prices, leaving most prospective customers with the straight choice of getting a hotel room or going Airbnb for their trip.