Following the successful launch year, The River Group publishes the second edition of Imagination: Make Britain Your Own. Contracted by VisitBritain, Imagination it is a government-first multi-lingual content marketing programme across print and digital platforms. 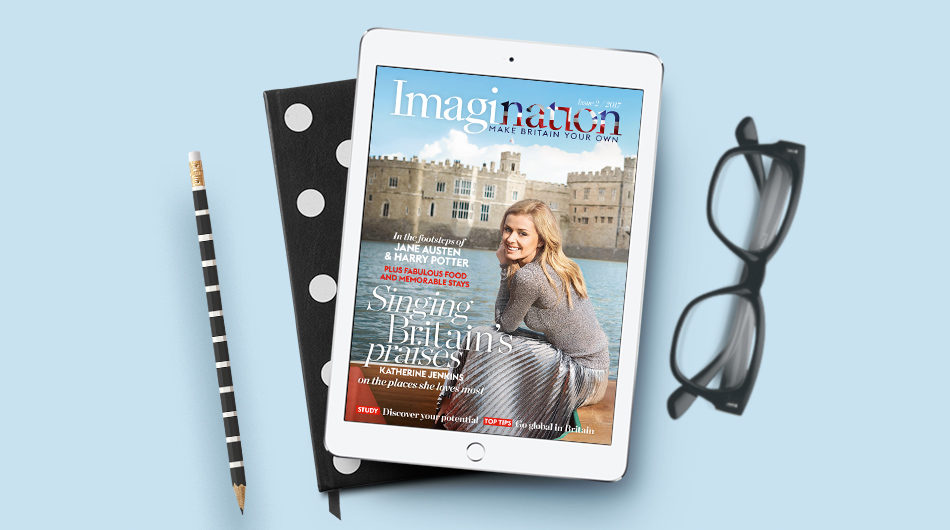 Digital Edition of VisitBritain’s Imagination: Make Britain Your Own

Imagination was awarded to River in 2015 and is a key initiative of the cross-government GREAT Britain Campaign to promote the UK. It is a high-quality magazine in both glossy print and digital formats. The print version is produced in English, with a digital edition, which is also produced in nine languages targeting a range of priority markets. It has enjoyed strong support from the GREAT Britain Campaign delivery partners:  Department for Culture, Media & Sport, VisitBritain, UK Trade & Investment, the Foreign & Commonwealth Office and the British Council.

The new edition is packed full of original and unique features and carries an exclusive cover feature with star Katherine Jenkins singing Britain’s praises, plus an opportunity to win a bespoke stay at Leeds Castle and London.

All digital international language editions are produced in-house at The River Group, with a team of native language specialists.  Imagination is available online in 9 languages: visitbritain.com/magazine

“We are very proud to have created another world class edition of Imagination, showcasing the best of what Britain has to offer to inspire people to visit, do business, invest and study in the UK and demonstrating The River Group’s ability not only to create original, high quality editorial, but content that will appeal to diverse readers from all around the world.”

Issue 2 Imagination: Make Britain Your Own is now live in print and digital formats:

International reach: The print magazine is distributed to 22 priority and 8 nurture markets. The site is accessed by 9 million unique users annually.