A Few Opinions and Five New Types of Naked Girls

Each month of the year has its own unique stories to tell and May is all the more special for it. Did you know that the Anglo-Saxons, yes, those ethnic Britons from Germany, called the month Tri-Milchi. It was in celebration of the fact that because of the lovely new grass, cows could be milked three times a day. Who’d have thought it? 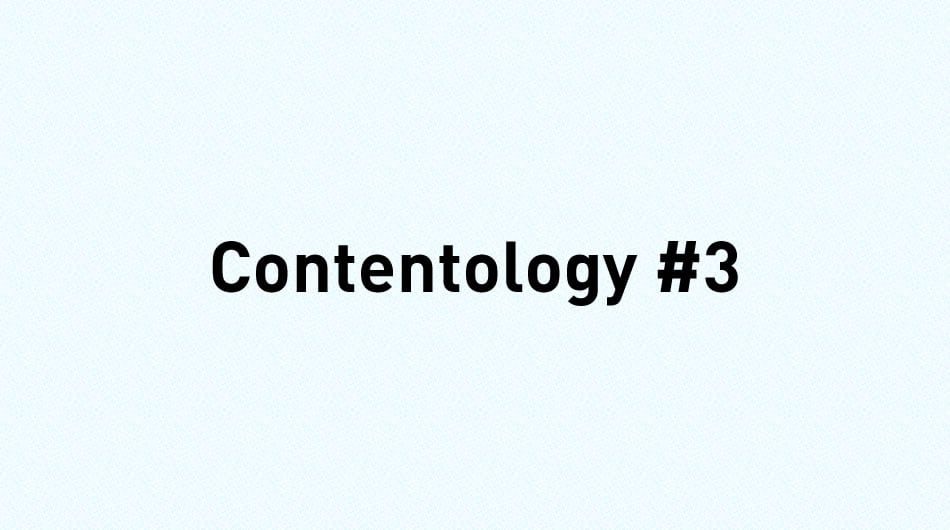 May marks the beginning of a hugely productive time when it comes to agriculture and we once celebrated it by dancing round May poles. In some parts of the UK we still do. Whether you find that tragic or enchanting depends on your perspective. And on the 1st of May, tradition had it that young women would wash their faces in the May dew, as it was said to have magical properties. Take note P&G.

On a final note, it’s also national smile month here in the UK (18 May to 18 June), so, sit back and enjoy this month’s edition of Contentology and remember, cheer up luv it might never happen.

Continuing with a loose theme of production I note from experience that in this branded content arena we inhabit, more, most definitely is still more. I saw a presentation given a year or so ago by a chap called Doug Kessler. It was called ‘Crap – Why the single biggest threat to content marketing is content marketing’ and the general theme was that as more and more service providers say they do ‘content’ we will inevitably be drowned in mediocrity. Has this come to pass yet?

I’m not sure, but those ‘five new types of naked girls’ ads that are dressed up as editorial comment are starting to tire. Particularly if I’m reading The Telegraph.

What is apparent is that not only does everyone have an opinion on content but amazingly they can all do it, really, really well. Which I find amazing given how much skill goes into writing editorial that doesn’t overtly sell, shooting video that would look good in the cinema, and photography that could grace the pages of a magazine you’d actually paid for.

Sadly, the current climate, or at least the one we think we are forced to live in (hint; we aren’t) suggests to us that average and now is better than high class and tomorrow.

I can’t help thinking that the only people losing out here are the brands themselves. Being pushed towards ubiquity through content strategies that give them plenty of visibility but do little for their brand equity.

I think it’s worth reminding people of something here. There is a point of view that brands are or should become publishers. It comes from the same concept that has fuelled the growth in content marketing. It’s the idea that brands need to create something of value for consumers. Make something I want rather than make me want something. We agree with this sentiment.

So we need to transfer the skills that make content producers so highly regarded by the consumer, who is often willing to part with hard earned cash to brand owners. This is the way forward because what publishers themselves have traditionally been good at it is community.

Not community in the traditional sense but ‘communities of interest’ – the type of community that brands need to cultivate, because shared interests and beliefs help to cement brands and their audiences.

As the line between shopkeeper and customer blurs, we don’t need more content, we need content that does more.

In keeping with the spirit of a new phase in the cycle of nature – when flowers emerge and crops begin to sprout – we’ve dug out (excuse the pun) a few examples of the agricultural kind.

It’s bread, which is about as close to agriculture as you can get this side of a combine harvester.

We like what they have done with Pinterest a lot. They’ve curated both their own content and other peoples’, using albums around lifestyle and ethical living to support brand values without being too self-promoting.It all fits in with Panera Bread’s cosy, familiar, healthy (but not at the expense of comfort) image.

If you like hunting, fishing and your favourite film is Deliverance then you more than likely to be someone who lives in the country and loves the open air.

This is why we think is just the ticket. A strong editorial voice that talks not just of country pastimes but of conservation, management and general wonder at how beautiful and savage nature can sometimes be. On top of that, you have an eclectic range of ‘how to’ videos, from skinning a rabbit or gutting a fish to turning your iPhone into a survival tool.  Good use of ancillary channels such as Facebook, Twitter, and Pinterest make the whole experience a positive one.

We promised you tractors and you get tractors.  Obviously buying a piece of farm equipment is not an impulse purchase, which is why Massey Ferguson has done such a sterling job in using content to engage prospective buyers over the long-term and nudge them towards the checkout at their own pace. The ‘Campaign for Real Bales’ for example, involves case studies and some clear copy to advertise balers and a competition thrown in.

Social media is well used and liked, some 140,000 followers on Facebook, and a good range of videos on YouTube. Full of relevant, interesting content that drives sales without coming across as pushy.