The digital communications revolution is in the hands of the consumer

One of the pleasures of being at the centre of radical change is working with people who have very different skills. I am talking about creative types – me – working with ‘geek’ types – the digi-techies at the forefront of the digital communications revolution. Geeks may not finish the digital revolution, it is now in the hands of the consumer, but they did begin it. Some would say the internet has changed our lives and culture as fundamentally, arguably more, than fire, the printing press, electricity, the computer and the motor car.

Geeks are the Johannes Gutenbergs of the 21st century. When printing presses were invented they fired the transfer of knowledge from the elite to the masses. Whereas before, writing and reading were arcane pursuits available only to a small, highly-educated minority.

The printing press meant ideas, in the form of books and documents, could spread quickly and to a wider audience. Knowledge is an agent of change. Knowledge is power.

Today we are so used to knowledge we don’t think twice about its value. Books, broadcast and now the internet. It’s just mind ‘stuff’, but the trajectory has been huge.

A big yesterday ago, ergo maybe ten years, you had to buy books, read newspapers, and do research if you wanted to know things. Today, the assumption is that anything is knowable, and it’s instant. You just Google it. Even people are knowable. You just Google them.

This easy acceptance of knowledge acquirement has been accompanied by another cultural shift. We are now consummate and constant consumers of entertainment. If we’re not Instagramming, Facebooking, looking at our favourite website for consumables, we’re watching films and YouTube posts.

If we want distraction, we can get it at any time, pretty much anywhere we want.

It is the Geeks who have invented and developed the omni-present devices, and systems that support them, that make this possible. Now, although geeks are probably very left-brain dominant – rational, systematic and analytical – I suspect they sometimes enjoy a play.

And I suspect play is a way into their soul! For soul read creativity. This ability to enjoy playing has been incorporated into the culture of the great bringers of digital – Apple being a perfect example. At its core, Apple employees are encouraged to think outside the box and explore. Cross-collaboration is key to innovation.

And then look at Google. As if we could ever ignore it! Google wasn’t the first search engine, or the first tech company with big ambitions, but its overwhelming success is down to its ability to think playfully. And to put the consumer first.

In a creative company, such as River, play – or uninhibited, explorative thinking – lies at the heart of how we produce the content we are good at. If you are talking about creative content the right answer is not arrived at by an algorithm but by a process of imagination, intuition and good old gut feel.

The best creative director doesn’t produce an a priori theorem from which the best creative idea can be derived. But he or she can have a think, a ‘play’ as we creatives joke, and then come up with an idea that is brilliant and will work.

Nowadays, understanding what is possible and what will be great for the consumer digitally is part of that creative job. We all speak some of the other’s languages now.

To get the best digital content requires a fluid and integrated response, blending technical expertise with creative wizardry.

When the digital revolution began technology was everything. We were all fascinated by what was possible. And very definitely geeks ruled the world. Knowledge is power, remember, and most of us just didn’t understand what the geeks were talking about.

Dangerous really. But understandable. Who has got the courage to put up their hand when someone is talking about the ways of the future and say, sorry I haven’t a clue what you are talking about?

It was scary. If you were a media company and a non-geek director, how could you decide what system, with what capability, at what cost, was the one your company needed to survive changing consumer habits?

Gillian Tett asked a similar question in relation to IT. We rely on IT experts to set up our computers at home and at work. Computer malfunction affects how planes fly, how welfare systems make payments, how banks release monies. Pretty much everything. Make a mistake with your IT system and the costs and consequences can be huge.

Gillian cites the example of board members of a big insurance company who voted funds for a massive IT project and subsequently admitted they hadn’t understood what they were buying because they simply didn’t understand the jargon and were too embarrassed to say so. Not questioning IT experts is tantamount, she argues, to putting ourselves in the same spot as the 2007 banking crisis. We hadn’t got a clue what the bankers were doing because we didn’t understand the jargon. Yet what they did fundamentally affected our lives.

One inference is, of course, don’t let experts blind you with gobbledegook. Even if they are the geniuses driving the digital revolution. Creating successful content is not all about technology. It’s about understanding the consumer and being able to produce really engaging things to read, look at, watch. And while everyone feels the pressure to come up with The Answer, when we put content out there we’re actually engaging with people. People are complicated. Things move on. There is no such thing as The Answer.

Even for Geeks. Again this is a lesson well learnt from Google, who understood that their incredibly clever tech would never really fly unless it was human-centric, content-focussed and continually evolving with the needs of real consumers.

Real people have remained at the heart of the digital publishing revolution. No-one and no single discipline has the ultimate insight into what will resonate with other people. This requires intuition and a creative call.

More recently I have seen a new expression on the face of the Geeks. Pleasure. Sheer playfulness. That ‘ahahaa’ moment. One discipline suggesting one solution, another proposing an alternative. And then, bang, smiles of agreement all round. Cross-collaboration. Intelligent thinking. Everyone’s participated. No one had The Answer. An answer was co-created.

So when it comes to techie gobbledegook, remember, whether you are a marketing director, or a humble content creative, there is no one answer to the question, what content does the consumer want and how do they want it?

So no-one needs to be worried about saying, I don’t understand. Why are we doing this? What is it for? Indeed better content will come from asking all these questions The good news is that digital delivers a lot of feedback and insight. That’s the output. The input, the content, is much simpler…. great things to entertain, inform and educate. And where words are involved they should be in good-old, plain but inspiring English. 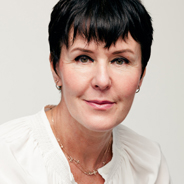 Jane is River’s head of all things creative.